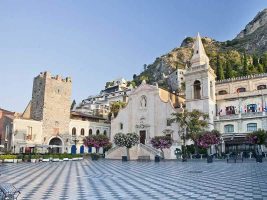 do not include tickets to museum/churches/theaters etc.

Discovering Europe’s highest active volcano among the ancient lava flows and craters. The Monti Silvestri (or Craters Silvestri) are two pyroclastic cones formed north of Nicolosi, at an altitude of 1,900 m, on the slopes of Mount Etna.Their formation dates back to the eruption of 1892: this began on July 9 with the formation of a radial fracture, between 2025 and 1800 m altitude, on the southern slope of the flanks of the volcano.

Are now among the best-known volcanic cones of the entire building because close to one of the most popular tourist areas of Etna, one of the Rifugio Sapienza and Etna Cable Car.

Among the many beauties that characterize the Etna, one should mention the numerous volcanic caves or lava tunnels due to ‘ingrottamento lava.

Among breathtaking views and houses surrounded by lava explore the volcanic caves safely.

You can not say that I actually visited the Etna if you have not seen the immensity of the Valle del Bove. The Bove valley is a huge volcanic depression that has been created around 65,000 years ago, 5 km wide and long 7 and its extension covers almost the entire eastern side of the volcano.

Inside the Valle del Bove, whose name is of unknown origin, flow most of the lava flows of Etna.

scenic culmination of almost all our tours to the volcano, you can often admire the volcanic activity of the volcano.

After a tasting of fried pizza from Nonna Peppina to Zafferana, the tour continues to Taormina, one of the most important tourist centers of the Sicilian region, known for its natural landscape, marine beauty and its historical monuments.

You visit the old town, the heart of the Town, the Cathedral, the belvedere.

With the ability to also visit the Greek Theatre, the site of many important national and international concerts.