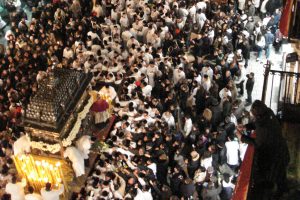 The festival of St. Agatha is the most important religious festival in the city of Catania. It is celebrated in honor of the patron saint of the city and takes place every year from the third of February, the day of martyrdom, to February the sixth.

In these dates pilgrims, tourists and curious people from all over Sicily arrive in Catania. It is considered the third festival of all Christianity for popular participation after Holy Week in Seville, and the Corpus Christi in Cuzco, Peru.

Along with the World Heritage Site of the late Baroque towns of the Val di Noto ( South-eastern Sicily ) awarded by UNESCO in 2002 , the feast of St. Agatha is a “good ethno-anthropological heritage of humanity” of the City of Catania in the world.