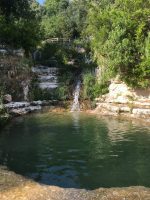 The way to arrive to Noto, the biggest city to Cava Carosello from Catania is quite easy, because the highway that connects this two cities of Sicily is really fast and easy to get by.

How to get there?

Noto is a city and comune in the Province of Syracuse, Sicily, Italy. It is 32 kilometres (20 mi) southwest of the city of Syracuse at the foot of the Iblean Mountains. It lends its name to the surrounding area Val di Noto. In 2002 Noto and its church were declared a UNESCO World Heritage Site.

How is the trip?

To arrive there is quite adventurous, but precisely that is the magic of the tour. You are arriving to one of those places that just locals know. Is hard to find foreigners out there, which means that the activity is not a crowded one.

When we get off the from the car, the trek starts. It is an easy one, but that doesn’t is not interesting. We went on roads of more than 500 years, because that Natural Park a few centuries ago was inhabited by farmers. It is an experience that also has a historical background.

We arrived to the paradise!

We will the photos and video we did to speak by themselves:

If you like what you’ve read, don’t forget to share this blog with your friends using your favourite social media:

Discover how was our trip to Cava Carosello, and oasis in the middle of the forest. Look for the blog post in bio. #visititaly #noto #wanderlust #trip #instapassport #catania #nature #visitsicily #sicily #sicilia #traveltheworld #traveling #nomad #trek #naturalbeauty #cascade #waterfall